Hardly a day that passes that someone somewhere on this gasping planet does not come up with a bright idea for a project for constructing high cost new infrastructure the main achievement of which ultimately will be to increase the number of vehicles in whatever the given space is.  This is so well known at the leading edge of transportation thinking and practice that it would be  hardly worthy of discussion, other than the fact that these  bright ideas appear all too often and in all too  many places. They need to be dealt with in a positive sense and with as much diplomacy as we can muster. 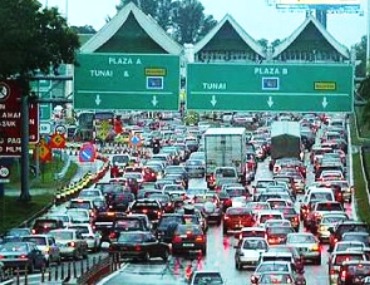 Enjoying the bridge in Penang

Here is a perfect  example from Penang which is refreshing given the way in which the author takes on the challenge of making a positive proposal instead of just lambasting the tunnel option. One might prefer not to specify the technology that will be used to improve throughput on the existing road/bridge system in this increasingly congested part of the world (in this case LRT or monorail).  However the main fundamentals are in place in this excellent newspaper article and worthy of the attention of all of those of us who care about sustainable transport, and above all the people and voters of Penang who are in a position to make this choice themselves — and not have the final decision foisted on them by people with approaches and agendas that do not necessarily match up with sustainable transport policy and practice in the 21st-century.  After all, it is their city.

THE audacious move by the Penang government to build an undersea tunnel
as part of a RM6.2 billion plan to alleviate traffic congestion on the
island may not necessarily solve the problem.

Another link between George Town and Butterworth on the mainland will
certainly enhance connectivity, but will also lead to a higher volume
of traffic flooding the island.

No doubt the undersea tunnel comes with a traffic dispersal plan
involving the construction of several new roads. However, this is not a
long-term solution as the island’s population will only grow. A rapid
transit system is a better solution — something that can be a reality
if the federal and state governments can put aside their differences
and work together.

The tunnel would have been an ideal project if the Second Penang Bridge
had not been built. The tunnel’s alignment is the shortest distance
between the island and the mainland and opens up a new frontier for
economic development.

The second bridge is long — some 23.5km — and does not really open up
new areas for development. The landing points at both ends are not too
far from those of the first bridge. The second bridge, built at a cost
of RM4.5 billion, will take some traffic off the current bridge but its
effectiveness in opening up new areas for development is questionable.

Had the federal government dusted its old files and taken seriously the
proposal to build an undersea tunnel instead, such doubts would have
been minimised. That’s because the landing point of the tunnel on the
mainland would have opened up a new economic frontier from Butterworth
right up to Sungai Petani in Kedah.

The undersea tunnel is not a new proposal and has been under study
since the early 1980s when the Penang Bridge was being mooted.
Japanese companies carried out detailed studies with local consultants
but somehow, the government decided not to go for it. The proposed
undersea tunnel measures 7.2km, of which 6.5km will be imbedded 15m
below the seabed.

It only came to life in 2010, when Chief Minister Lim Guan Eng
announced plans for it, as well as for a network of new roads on the
island. The company that undertakes the project will in return be given
110 acres of land for development. Nobody took Lim, an accountant by
training, seriously. But in February, the sceptics knew the project was
for real when the the state in principle awarded the RM6.2 billion
infrastructure job to little-known Consortium Zenith BUCG Sdn Bhd.

A resounding victory in the state for the Pakatan Rakyat coalition in
the May general election lent further credence to the probable
implementation of the mega project.

An interview with Consortium Zenith reveals that the company
went through painstaking efforts to prepare its bid. Its proposal was
in the form of documents as high as a refrigerator, said its chairman
Datuk Zarul Ahmad Zulkifli.

Now, since the Second Penang Bridge has already been built — although
the alignment leaves much to be desired — the marginal benefit of an
undersea tunnel has diminished. But that does not mean the state
government’s plans to provide land in exchange for infrastructure
should be scrapped. By venturing on its own to monetise the land for
infrastructure development in the state, Penang has proved that it does
not need to wait for federal government funds.

The ideal long-term solution to alleviate the traffic problem, however,
is a rapid transit system for George Town, with a link to the mainland.
It can be in the form of a light rail system or monorail, which are
cheaper and faster to build. Such a system would reduce the large
number of cars going into the island every day. Thousands commute
between the island and the mainland every day to get to their offices,
factories and schools and even to go to hospitals.

As far as cost goes, it should not be very much more than the estimated
RM4 billion to construct the undersea tunnel. The cost of building a
monorail currently is about RM120 million per kilometre. But if the
state governed by the Pakatan Rakyat were to drive the project, with
Lim at the helm, taxpayers can have more than a reasonable hope that
the cost for a rapid transit system can be reduced.

What is better is that the Consortium Zenith companies are equipped to
undertake the project. China Railway Construction Co, a member of the
consortium, is China’s largest engineering company and has designed and
constructed railways, highways and tunnels. One reason Lim chose an
undersea tunnel and a multitude of roads is because building such
infrastructure does not require approval from the federal government.

However, a rapid transit system — a massive overland structure — will
require some degree of approval from entities controlled by the federal
government. More so if the public transport system is to run close to
the existing Penang Bridge, which is indirectly owned by Khazanah
Nasional Bhd, to link the island and the mainland. However, there is
little reason for the federal government to oppose such a move.

Under Barisan Nasional’s manifesto for Penang, it pledged to build a
monorail system on the island to resolve the traffic problem should it
come to power. But the election results clearly showed that the vow was
far from enough to swing the votes.

If the Pakatan Rakyat state government proposes such a move and and the
federal government objects to it, it would portray the latter in a bad
light. In fact, the federal government should not only facilitate the
state’s efforts but help by providing some financial support and seeing
that the project takes off.

As long as the letter of award has not been signed, it is not too late
to change the existing plan. The initial phase is to build the freeways
on the island. The undersea tunnel is the last phase in the RM6.3
billion mega infrastructure plan and is slated to be carried out in
2020.

Now that the general election is over, many will not disagree with the
view that Penang is likely to continue to be ruled by the opposition
for a long time to come. Thus, it is better for the federal and state
governments to work together on a practical, long-term solution to
Penang’s traffic woes.

* M Shanmugam is managing editor at The Edge. This article wasfirst published in The Edge Malaysia Sept 16-22.
http://www.fz.com/content/rapid-transit-system-better-option-tunnel#ixzz2faFEcXD9